The Tappy East Creek is a very shallow stream that runs along the east border of Burkittsville, Maryland.

In August of 1825, a young girl named Eileen Treacle drowned in the river. Eleven eye-witnesses claimed to have seen a ghostly hand reach up out of the water and pull the girl under. Despite a search of the river, Eileen's body was never found.

Several days later, the creek mysteriously became clogged with oily bundles of sticks, rendering the water useless for thirteen days. Several animals got sick as a result, while a man wandered by the creek sometime after and drank the water, which resulted in his death.

Mary Brown once saw a half-human, half-animal beast near the creek that she believed to be the Blair Witch. 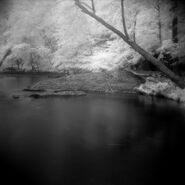 Add a photo to this gallery
Retrieved from "https://blairwitch.fandom.com/wiki/Tappy_East_Creek?oldid=6584"
Community content is available under CC-BY-SA unless otherwise noted.